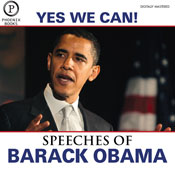 Yes We Can: The Speeches of Barack Obama

Written By Barack Obama
Read By
Length: 3 hours and 15 minutes

Expanded from the original, Yes We Can! offers highlights from speeches by Barack Obama and includes his entire inaugural address as an added bonus. For this collection, speeches were chosen to showcase President Obama's powerful, inspiring rhetoric of hope and change and to represent his stands on issues such as climate, energy, service, and the Iraq war. Includes: "2004 DNC Keynote Address" "Roast of Representative Rahm Emanuel" "Take Back America" "Call to Renewal" "My Plans for 2008" "The War We Need to Win" "Yes We Can" "A More Perfect Union" "AP Annual Luncheon Address" "Remarks on Service" "Address to the People of Berlin" "New Energy for America" "2008 DNC Address" "Alfred E. Smith Memorial Foundation Dinner" "President-Elect Victory Speech" "Remarks to the Global Climate Summit" "Introduction of Clinton and National Security Team" "Inaugural Address"

Yes We Can is available in a downloadable version that can be played on iPods, iPhones, iPads, Droid phones, Blackberry's and numerous other types of devices.

This reading of Yes We Can is shorter than average. It is 195 minutes long. This makes the listening experience about 100% shorter than normal.

This version of Yes We Can: The Speeches of Barack Obama costs less than average. The price is $10.46 and that is 42% less than the average.

Barack Obama has published 12 audiobooks, including Yes We Can: The Speeches of Barack Obama.

Barack Obama's audiobooks are rated by listeners at 73 out of a possible 100 points and that about 1% worse than the average rating.

Barack Obama's average book is 319 minutes long and that makes this author's books about 10% shorter than the average length.

Barack Obama's audio books are priced at an average of $19.85. That makes them about 10% more expensive than the average price.

Phoenix Books has published 492 audio CD books, including Yes We Can: The Speeches of Barack Obama.

Phoenix Books's average book is 282 minutes long and that makes the performances of this publisher's books about 21% shorter than the average length.

Phoenix Books's average audiobook costs $16.60 and that makes this publisher's books about 8% less than the average price.

Bubby says:
That kind of thninikg shows you're an expert

The Price of Peoplehood: Ten Talks from a ...

Jerry Rice on Football at the 92nd Street Y