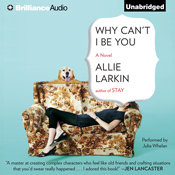 Why Can't I Be You

At one time or another, everyone has wished they could be someone else. Exploring this universal longing, Allie Larkin follows up the success of her debut novel, Stay, with a moving portrait of friendship and identity. When Jenny Shaw hears someone shout "Jessie!" across a hotel lobby, she impulsively answers. All her life, Jenny has toed the line, but something propels her to seize the opportunity to become Jessie Morgan, a woman to whom she bears an uncanny resemblance. Lonely in her own life, Jenny is embraced by Jessie¿s warm circle of friends - and finds unexpected romance. But when she delves into Jessie¿s past, Jenny discovers a secret that spurs her to take another leap into the unknown.

Brilliance Audio presents Why Can't I Be You written by Allie Larkin and read by Julia Whelan .

Why Can't I Be You is available in a downloadable version that can be played on iPods, iPhones, iPads, Droid phones, Blackberry's and numerous other types of devices.

This performance of Why Can't I Be You is longer than average at 500 minutes long.

This version of Why Can't I Be You costs less than average. The price is $13.99 and that is 22% less than the average.

Allie Larkin has published 3 audiobooks, including Why Can't I Be You (Unabridged).

Allie Larkin's audiobooks are rated by listeners at 53 out of a possible 100 points and that about 28% worse than the average rating.

The average audio book written by Allie Larkin is 549 minutes long. That makes this author's books about 55% longer than the average length.

Allie Larkin's audio books are priced at an average of $21.66. That makes them about 20% more expensive than the average price.

Brilliance Audio has published 8036 audio CD books, including Why Can't I Be You (Unabridged).

The End Is Now