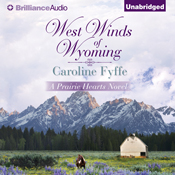 In Book Three of the Prairie Hearts series by USA Today best-selling author Caroline Fyffe, two broken hearts just might find a second chance at love. When widower Charlie Rose shows up looking for work at the struggling Cotton Ranch, no one knows he¿s secretly trying to outrun trouble - and he intends to keep it that way. He wants to start over fresh in the small town of Logan Meadows, where his blind daughter can grow up safe¿and where danger can¿t find him. Feisty and independent, Nell Page is determined to protect the Cotton Ranch, despite threats from the bank¿and the mysterious stranger lurking on the ranch¿s borders. In spite of her better judgment, Nell instantly feels drawn to handsome, dependable Charlie. The more they ride together through the beautiful Wyoming mountains and plains, the more their feelings grow into a love that could be strong enough to last forever. But will Charlie¿s past catch up with him and dash their hopes for a future together?

West Winds of Wyoming is available in a downloadable version that can be played on iPods, iPhones, iPads, Droid phones, Blackberry's and numerous other types of devices.

This performance of West Winds of Wyoming is longer than average at 591 minutes long.

This version of West Winds of Wyoming: Prairie Hearts, Book 3 costs less than average. The price is $10.49 and that is 42% less than the average.

Caroline Fyffe's audiobooks are rated by listeners at 0 out of a possible 100 points and that about 100% worse than the average rating.

The average audio book written by Caroline Fyffe is 506 minutes long. That makes this author's books about 43% longer than the average length.

Caroline Fyffe's average audiobook is priced at $16.90 and that makes this author's books about 6% less than the average price.