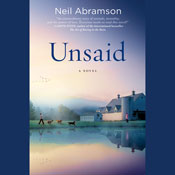 Unsaid is told from the perspective of Helena Colden, a veterinarian who has just died of breast cancer. Helena is forced to witness the rapid emotional deterioration of her husband, David. With Helena's passing, David, a successful Manhattan attorney, loses the only connection that made his life full. He tries to carry on the life that Helena had created for them, but he is too grief-stricken, too angry, and too quickly reabsorbed into the demands of his career. Helena's animals likewise struggle with the loss of their understanding and compassionate human companion. Because of Helena, David becomes involved in a court case to save the life of a chimpanzee that may hold the key to unlocking the mysteries of animals consciousness. Through this case all the threads of Helena's life entwine and explode - unexpectedly, painfully, beautifully.

Unsaid is available in a downloadable version that can be played on iPods, iPhones, iPads, Droid phones, Blackberry's and numerous other types of devices.

This performance of Unsaid is longer than average at 676 minutes long.

Unsaid: A Novel costs more than the average. This version costs $25.49 and that is 42% more than average.

Angela Brazil's reading of Unsaid: A Novel by Neil Abramson's is rated 74 out of a possible 100 points.

Neil Abramson's audiobooks are rated about average with a score of 74 out of a possible 100 points.

The average audio book written by Neil Abramson is 676 minutes long. That makes this author's books about 90% longer than the average length.

Neil Abramson's audio books are priced at an average of $25.49. That makes them about 42% more expensive than the average price.

Sins of the Flesh