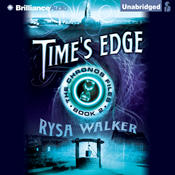 To stop her sadistic grandfather, Saul, and his band of time travelers from rewriting history, Kate must race to retrieve the CHRONOS keys before they fall into the Cyrists¿ hands. If she jumps back in time and pulls the wrong key - one that might tip off the Cyrists to her strategy - her whole plan could come crashing down, jeopardizing the future of millions of innocent people. Kate¿s only ally is Kiernan, who also carries the time-traveling gene. But their growing bond threatens everything Kate is trying to rebuild with Trey, her boyfriend who can¿t remember the relationship she can¿t forget. As evidence of Saul¿s twisted mind builds, Kate¿s missions become more complex, blurring the line between good and evil. Which of the people Saul plans to sacrifice in the past can she and Kiernan save without risking their ultimate goal - or their own lives?

Time's Edge is available in a downloadable version that can be played on iPods, iPhones, iPads, Droid phones, Blackberry's and numerous other types of devices.

This performance of Time's Edge is longer than average at 807 minutes long.

This version of Time's Edge: The Chronos Files, Book 2 costs less than average. The price is $10.49 and that is 42% less than the average.

Rysa Walker's audiobooks are rated by listeners at 0 out of a possible 100 points and that about 100% worse than the average rating.

The average audio book written by Rysa Walker is 581 minutes long. That makes this author's books about 64% longer than the average length.

Rysa Walker's average audiobook is priced at $11.98 and that makes this author's books about 33% less than the average price.