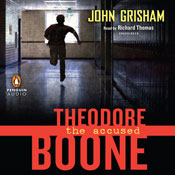 Theodore Boone is back! And he's ready for his next big case. Theo Boone might only be 13, but he's already uncovered key evidence in a groundbreaking murder trial and discovered the truth behind his best friend's abduction. Now with the latest unfolding of events in Strattenburg, Theo will face his biggest challenge yet. Filled with the intrigue and page-turning suspense that made John Grisham a number-one international best seller and the undisputed master of the legal thriller, Theodore Boone's adventures will keep listeners enthralled until the very last minute.

Theodore Boone is available in a downloadable version that can be played on iPods, iPhones, iPads, Droid phones, Blackberry's and numerous other types of devices.

This reading of Theodore Boone is shorter than average. It is 319 minutes long. This makes the listening experience about 100% shorter than normal.

This version of Theodore Boone: The Accused costs less than average. The price is $13.96 and that is 22% less than the average.

Richard Thomas's reading of Theodore Boone: The Accused by John Grisham's is rated 74 out of a possible 100 points.