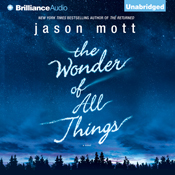 The Wonder of All Things

From critically acclaimed and bestselling author Jason Mott comes a spellbinding tale of love, sacrifice and the power of miracles. On an ordinary day, at an air show like that in any small town across the country, a plane crashes into a crowd of spectators, killing and injuring dozens. But when the dust clears, a thirteen-year-old girl named Ava is found huddled beneath a pocket of rubble with her best friend, Wash. He is injured and bleeding, and when Ava places her hands over him, his wounds miraculously disappear. Ava has a unique gift: she can heal others of their physical ailments. Until the air show tragedy, her gift was a secret. But now the whole world knows, and suddenly Ava is thrust into the spotlight. People from all over the globe begin flocking to her small town, looking for healing and eager to glimpse the wonder of a miracle. But Ava's unusual ability comes at a great cost - her own health - and as she grows weaker with each healing, Ava begins searching for an escape. Wash agrees to help Ava, but little does she know he has his own secret he's been harboring, and soon Ava finds herself having to decide just how much she's willing to sacrifice in order to save the one she loves most.

Brilliance Audio presents The Wonder of All Things written by Jason Mott and read by Julia Whelan .

The Wonder of All Things is available in a downloadable version that can be played on iPods, iPhones, iPads, Droid phones, Blackberry's and numerous other types of devices.

This performance of The Wonder of All Things is longer than average at 526 minutes long.

The Wonder of All Things costs more than the average. This version costs $20.99 and that is 17% more than average.

Jason Mott's audiobooks are rated by listeners at 0 out of a possible 100 points and that about 100% worse than the average rating.

The average audio book written by Jason Mott is 557 minutes long. That makes this author's books about 57% longer than the average length.

Jason Mott's audio books are priced at an average of $19.48. That makes them about 8% more expensive than the average price.

Brilliance Audio has published 8036 audio CD books, including The Wonder of All Things (Unabridged).

Earthlight & Other Stories: The Collected ...