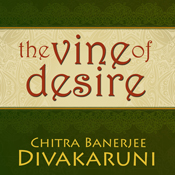 The Vine of Desire

The beloved characters of Chitra Banerjee Divakaruni's best-selling novel Sister of My Heart are reunited in this powerful narrative that challenges the emotional bond between two lifelong friends, as the husband of one becomes dangerously attracted to the other. Anju and Sudha formed an astounding, almost psychic connection during their childhood in India. When Anju invites Sudha, a single mother in Calcutta, to come live with her and her husband, Sunil, in California, Sudha foolishly accepts, knowing full well that Sunil has long desired her. As Sunil's attraction rises to the surface, the trio must struggle to make sense of the freedoms of America - and of the ties that bind them to India and to one another.

The Vine of Desire is available in a downloadable version that can be played on iPods, iPhones, iPads, Droid phones, Blackberry's and numerous other types of devices.

This performance of The Vine of Desire is longer than average at 670 minutes long.

The Vine of Desire costs more than the average. This version costs $24.95 and that is 39% more than average.

Chitra Banerjee Divakaruni has published 10 audiobooks, including The Vine of Desire (Unabridged).

Chitra Banerjee Divakaruni's audiobooks are rated by listeners at 38 out of a possible 100 points and that about 49% worse than the average rating.

The average audio book written by Chitra Banerjee Divakaruni is 580 minutes long. That makes this author's books about 63% longer than the average length.

Chitra Banerjee Divakaruni's audio books are priced at an average of $24.30. That makes them about 35% more expensive than the average price.

Audible Studios has published 2598 audio CD books, including The Vine of Desire (Unabridged).

Sins of the Flesh