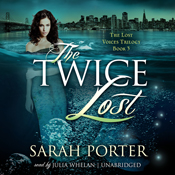 In the exciting final installment of the Lost Voices trilogy, mermaid Luce swims to the San Francisco Bay where she finds a group of renegade mermaids who become an army under her leadership when war breaks out between humans and mermaids. Mermaids have been sinking ships and drowning humans for centuries, and now the government is determined to put an end to the mermaid problem - by slaughtering them all. Luce, a mermaid with exceptionally threatening abilities, becomes their number-one target, hunted as she flees down the coast toward San Francisco. There she finds hundreds of mermaids living in exile under the docks of the bay. They are the Twice Lost: once-human girls lost first when a trauma turned them into mermaids and lost a second time when they broke mermaid law and were rejected by their tribes. Luce is stunned when they elect her as their leader. But she won¿t be their queen. She¿ll be their general. And they will become the Twice Lost Army - because this is war.

The Twice Lost is available in a downloadable version that can be played on iPods, iPhones, iPads, Droid phones, Blackberry's and numerous other types of devices.

This performance of The Twice Lost is longer than average at 885 minutes long.

The Twice Lost: The Lost Voices Trilogy, Book 3 costs more than the average. This version costs $23.07 and that is 28% more than average.

Sarah Porter's audiobooks are rated by listeners at 49 out of a possible 100 points and that about 33% worse than the average rating.

The average audio book written by Sarah Porter is 736 minutes long. That makes this author's books about 107% longer than the average length.

Sarah Porter's audio books are priced at an average of $21.90. That makes them about 22% more expensive than the average price.

Blackstone Audio, Inc. prices their narrated books at a premium. Their books are priced 20% higher than the average price.