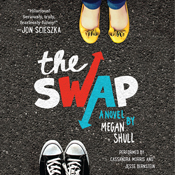 "You be me.... and I'll be you." Ellie spent the summer before seventh grade getting dropped by her best friend since forever. Jack spent it training in "The Cage" with his tough-as-nails brothers and hard-to-please dad. By the time middle school starts, they're both ready for a change. And just as Jack's thinking girls have it so easy, Ellie's wishing she could be anyone but herself. Then, BAM! They swap lives - and bodies ! Now Jack's fending off mean girls at sleepover parties, while Ellie's reigning as The Prince of Thatcher Middle School. As their crazy weekend races on - and their feelings for each other grow - Ellie and Jack begin to wonder if maybe the best way to learn how to be yourself is to spend a little time being somebody else.

The Swap is available in a downloadable version that can be played on iPods, iPhones, iPads, Droid phones, Blackberry's and numerous other types of devices.

This performance of The Swap is longer than average at 565 minutes long.

The Swap costs more than the average. This version costs $27.99 and that is 56% more than average.

Megan Shull's audiobooks are rated by listeners at 0 out of a possible 100 points and that about 100% worse than the average rating.

The average audio book written by Megan Shull is 565 minutes long. That makes this author's books about 59% longer than the average length.

Megan Shull's audio books are priced at an average of $27.99. That makes them about 56% more expensive than the average price.

Harper Audio prices their narrated books at a premium. Their books are priced 20% higher than the average price.