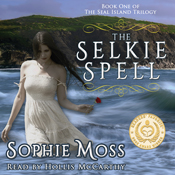 American doctor Tara Moore wants to disappear. On the run from an abusive husband, she seeks shelter on a windswept Irish island and dismisses the villagers' speculation that she is descended from a selkie - a magical creature who is bewitching the island. But when a ghostly woman appears to her with a warning, Tara realizes it was more than chance that brought her to this island. Desperate to escape a dark and dangerous past, she struggles against a passionate attraction to handsome islander, Dominic O'Sullivan. But the enchantment of the island soon overpowers her and she falls helpless under its spell. Caught between magic and reality, Tara must find a way to wield both when a dangerous stranger from her past arrives, threatening to destroy the lives of everyone on the island.

The Selkie Spell is available in a downloadable version that can be played on iPods, iPhones, iPads, Droid phones, Blackberry's and numerous other types of devices.

This performance of The Selkie Spell is longer than average at 501 minutes long.

The Selkie Spell: Seal Island, Volume 1 costs more than the average. This version costs $18.49 and that is 3% more than average.

Sophie Moss's audiobooks are rated by listeners at 0 out of a possible 100 points and that about 100% worse than the average rating.

The average audio book written by Sophie Moss is 524 minutes long. That makes this author's books about 48% longer than the average length.

Sophie Moss's audio books are priced at an average of $19.22. That makes them about 7% more expensive than the average price.

Sophie Moss prices their narrated books at a premium. Their books are priced 7% higher than the average price.