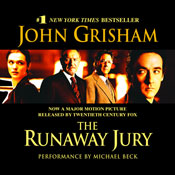 In Biloxi, Mississippi, a landmark tobacco trial with hundreds of millions of dollars at stake begins routinely, then swerves mysteriously off course. The jury is behaving strangely, and at least one juror is convinced he's being watched. Soon they have to be sequestered. Then a tip from an anonymous young woman suggests she is able to predict the juror's increasingly odd behavior. Is the jury somehow being manipulated, or even controlled? If so, by whom? And, more important, why?

The Runaway Jury is available in a downloadable version that can be played on iPods, iPhones, iPads, Droid phones, Blackberry's and numerous other types of devices.

This performance of The Runaway Jury is longer than average at 362 minutes long.

The Runaway Jury costs more than the average. This version costs $19.53 and that is 8% more than average.

Michael Beck's reading of The Runaway Jury by John Grisham's is rated 74 out of a possible 100 points.

John Grisham has published 117 audiobooks, including The Runaway Jury.

Bantam Doubleday Dell Audio's average book is 345 minutes long and that makes the performances of this publisher's books about 3% shorter than the average length.

Bantam Doubleday Dell Audio prices their narrated books at a premium. Their books are priced 4% higher than the average price.

The Other Side of Midnight

The Body Farm: A Scarpetta Novel