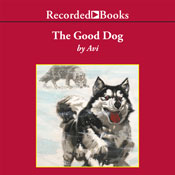 Written By
Read By Robert Ramirez
Length: 4 hours and 37 minutes

The 300 dogs of Steamboat Springs, Colorado, all know their places. At the top is McKinley, a malamute who¿s head dog of the whole town. All of the dogs - and McKinley¿s human family - rely on him to protect them and maintain order. Avi, the Newbery Medal author of Crispin: The Cross of Lead, peeks into the secret lives of dogs in this thrilling adventure tale. Robert Ramirez¿s narration gives voice to a dog willing to risk any peril to do the good thing.

Recorded Books presents The Good Dog written by and read by Robert Ramirez .

The Good Dog is available in a downloadable version that can be played on iPods, iPhones, iPads, Droid phones, Blackberry's and numerous other types of devices.

This reading of The Good Dog is shorter than average. It is 277 minutes long. This makes the listening experience about 100% shorter than normal.

This version of The Good Dog costs less than average. The price is $17.49 and that is 3% less than the average.

has published 805 audiobooks, including The Good Dog (Unabridged).

Listeners rate 's at 74 out of a possible 100 points. This is about 0% better than the average rating.

's average book is 227 minutes long and that makes this author's books about 36% shorter than the average length.

's audio books are priced at an average of $22.36. That makes them about 24% more expensive than the average price.

Recorded Books prices their narrated books at a premium. Their books are priced 43% higher than the average price.

Eye of the Oracle: Oracles of Fire