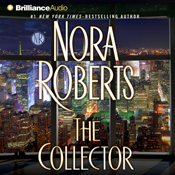 From number-one New York Times best-selling author Nora Roberts comes a novel of a woman who needs nothing, a man who sees everything, and the web of deceit, greed, and danger that brings them together - and that could tear them apart.¿ As a professional house sitter and freelance writer, nothing ties Lila Emerson down - not her work, not a home, and definitely not a relationship. She spends her life moving from one job to the next, sometimes crashing at a friend¿s Manhattan apartment. And though she can appreciate her clients' extraordinary homes, their expensive collections, and their adorable pets, Lila has never longed for possessions of her own. Everything she has, including her heart, is portable. But when she witnesses a possible murder-suicide from her current apartment-sitting job, life as Lila knows it takes a dramatic turn. Artist Ashton Archer knows his charming, clever, and impulsive brother couldn¿t have killed his girlfriend - or taken his own life. His hope of unraveling what happened lies with Lila, the only eyewitness. And even buried in grief, Ash longs to paint the woman whose deep, dark eyes seem to hold endless reserves of strength and a fiery passion. Chalking up their intense attraction to the heat of the moment, Lila agrees to help Ash in trying to find out who murdered his brother and why. From the penthouses of Manhattan to grand Italian villas, their investigation draws them into a rarefied circle where priceless antiques are bought, sold, gambled away, and stolen, where what you possess is who you are, and where what you desire becomes a deadly obsession.¿

The Collector is available in a downloadable version that can be played on iPods, iPhones, iPads, Droid phones, Blackberry's and numerous other types of devices.

This performance of The Collector is longer than average at 545 minutes long.

This version of The Collector costs less than average. The price is $17.00 and that is 6% less than the average.

Nora Roberts has published 261 audiobooks, including The Collector.

Nora Roberts's audiobooks are rated by listeners at 61 out of a possible 100 points and that about 17% worse than the average rating.

The average audio book written by Nora Roberts is 542 minutes long. That makes this author's books about 53% longer than the average length.

Nora Roberts's audio books are priced at an average of $21.11. That makes them about 17% more expensive than the average price.

Brilliance Audio has published 8036 audio CD books, including The Collector.

One Season of Sunshine