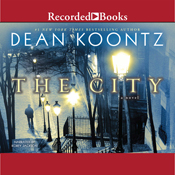 There are millions of stories in the city - some magical, some tragic, others terror-filled or triumphant. Jonah Kirk¿s story is all of those things as he draws listeners into his life in the city as a young boy, introducing his indomitable grandfather, also a "piano man"; his single mother, a struggling singer; and the heroes, villains, and everyday saints and sinners who make up the fabric of the metropolis in which they live - and who will change the course of Jonah¿s life forever. Welcome to The City, a place of evergreen dreams where enchantment and malice entwine, where courage and honor are found in the most unexpected corners and the way forward lies buried deep inside the heart.

The City is available in a downloadable version that can be played on iPods, iPhones, iPads, Droid phones, Blackberry's and numerous other types of devices.

This performance of The City is longer than average at 791 minutes long.

The City costs more than the average. This version costs $27.99 and that is 56% more than average.

Dean Koontz has published 95 audiobooks, including The City (Unabridged).

Dean Koontz's audiobooks are rated by listeners at 64 out of a possible 100 points and that about 14% worse than the average rating.

The average audio book written by Dean Koontz is 674 minutes long. That makes this author's books about 90% longer than the average length.

Dean Koontz's audio books are priced at an average of $26.87. That makes them about 49% more expensive than the average price.

Recorded Books prices their narrated books at a premium. Their books are priced 43% higher than the average price.

The Body Farm: A Scarpetta Novel