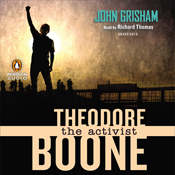 Though he's only 13, Theodore Boone has spent more time in the courtroom than almost anywhere else, and there's always a new adventure waiting. After being falsely accused of vandalism and theft, Theo is happy to finally be out of the hot seat, once more dispensing legal advice to friends and community members, when an exciting new case demands his urgent attention.

The Activist is available in a downloadable version that can be played on iPods, iPhones, iPads, Droid phones, Blackberry's and numerous other types of devices.

This performance of The Activist is longer than average at 356 minutes long.

This version of The Activist: Theodore Boone costs less than average. The price is $13.96 and that is 22% less than the average.

Queen Kat, Carmel and St Jude Get a Life