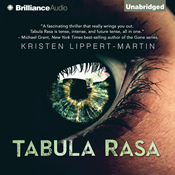 The Bourne Identity meets Divergent in this action-packed debut thriller with a Katniss-esque heroine fighting to regain her memories and stay alive, set against a dystopian hospital background. Sarah starts a crazy battle for her life within the walls of her hospital-turned-prison when a procedure to eliminate her memory goes awry and she starts to remember snatches of her past. Was she an urban terrorist or vigilante? Has the procedure been her salvation or her destruction? The answers lie trapped within her mind. To access them, she'll need the help of the teen computer hacker who's trying to bring the hospital down for his own reasons, and a pill that's blocked by an army of mercenary soldiers poised to eliminate her for good. If only she knew why...

Tabula Rasa is available in a downloadable version that can be played on iPods, iPhones, iPads, Droid phones, Blackberry's and numerous other types of devices.

This performance of Tabula Rasa is longer than average at 461 minutes long.

This version of Tabula Rasa costs less than average. The price is $17.49 and that is 3% less than the average.

Kristen Lippert-Martin's audiobooks are rated by listeners at 0 out of a possible 100 points and that about 100% worse than the average rating.

The average audio book written by Kristen Lippert-Martin is 461 minutes long. That makes this author's books about 30% longer than the average length.

Kristen Lippert-Martin's average audiobook is priced at $17.49 and that makes this author's books about 3% less than the average price.