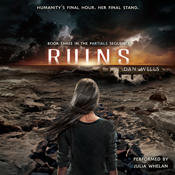 Our time is almost up. As the clock ticks closer and closer to the final Partial expiration date, humans and Partials stand on the brink of war. Caught in the middle, thousands of miles apart, are Samm and Kira: Samm, who is trapped on the far side of the continent beyond the vast toxic wasteland of the American Midwest; and Kira, now in the hands of Dr. Morgan, who is hell-bent on saving what's left of the Partials, even if she has to destroy Kira to do it. The only hope lies in the hands of the scattered people of both races who seek a way to prevent the rapidly escalating conflict. But in their midst appears a mysterious figure, neither human nor Partial, with solemn warnings of a new apocalypse - one that none of them may be able to avert. The final installment in the Partials Sequence is a thrill ride of epic proportions, as the last remnants of life on our planet fight to determine its final fate.

Ruins is available in a downloadable version that can be played on iPods, iPhones, iPads, Droid phones, Blackberry's and numerous other types of devices.

This performance of Ruins is longer than average at 760 minutes long.

Ruins costs more than the average. This version costs $27.99 and that is 56% more than average.

Dan Wells's audiobooks are rated by listeners at 50 out of a possible 100 points and that about 32% worse than the average rating.

The average audio book written by Dan Wells is 584 minutes long. That makes this author's books about 65% longer than the average length.

Dan Wells's audio books are priced at an average of $24.95. That makes them about 39% more expensive than the average price.

HarperAudio prices their narrated books at a premium. Their books are priced 27% higher than the average price.