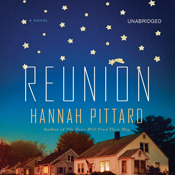 The author of the highly acclaimed The Fates Will Find Their Way returns with a novel about a far-flung family reunited for one weekend by their father's death. Five minutes before her flight is set to take off, Kate Pulaski, failed screenwriter and newly failed wife with scarcely a hundred dollars to her name, learns that her estranged father has killed himself. More shocked than saddened by the news, she gives in to her siblings' request that she join them, along with her many half-siblings and most of her father's five former wives, in Atlanta, their birthplace, for a final farewell. Written with huge heart and bracing wit, Reunion takes place over the following four days, as family secrets are revealed, personal foibles are exposed, and Kate - an inveterate liar looking for a way to come clean - slowly begins to acknowledge the overwhelming similarities between herself and the man she never thought she'd claim as an influence, much less a father. Hannah Pittard's "engaging and vigorous" ( Chicago Tribune ) prose masterfully illuminates the problems that can divide modern families - and the ties that prove impossible to break.

Reunion is available in a downloadable version that can be played on iPods, iPhones, iPads, Droid phones, Blackberry's and numerous other types of devices.

This performance of Reunion is longer than average at 429 minutes long.

Reunion: A Novel costs more than the average. This version costs $24.55 and that is 36% more than average.

Hannah Pittard's audiobooks are rated by listeners at 37 out of a possible 100 points and that about 50% worse than the average rating.

The average audio book written by Hannah Pittard is 374 minutes long. That makes this author's books about 5% longer than the average length.

Hannah Pittard's audio books are priced at an average of $21.25. That makes them about 18% more expensive than the average price.

Who Do I Lean On?

Riders of the Purple Sage