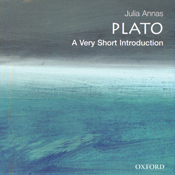 This lively and accessible introduction to Plato focuses on the philosophy and argument of his writings, drawing the listener into Plato's way of doing philosophy, and the general themes of his thinking. This is not an audiobook to leave the listener standing in the outer court of introduction and background information, but leads directly into Plato's argument. It looks at Plato as a thinker grappling with philosophical problems in a variety of ways, rather than a philosopher with a fully worked-out system. It includes a brief account of Plato's life and the various interpretations that have been drawn from the sparse remains of information. It stresses the importance of the founding of the Academy and the conception of philosophy as a subject. Julia Annas discusses Plato's style of writing: His use of the dialogue form, his use of what we today call fiction, and his philosophical transformation of myths. She also looks at his discussions of love and philosophy, his attitude to women, and to homosexual love, explores Plato's claim that virtue is sufficient for happiness, and touches on his arguments for the immortality of the soul, and his ideas about the nature of the universe.

Plato is available in a downloadable version that can be played on iPods, iPhones, iPads, Droid phones, Blackberry's and numerous other types of devices.

This reading of Plato is shorter than average. It is 176 minutes long. This makes the listening experience about 100% shorter than normal.

This version of Plato: A Very Short Introduction costs less than average. The price is $6.95 and that is 61% less than the average.

Julia Annas's audiobooks are rated by listeners at 37 out of a possible 100 points and that about 50% worse than the average rating.

Julia Annas's average book is 200 minutes long and that makes this author's books about 44% shorter than the average length.

Julia Annas's average audiobook is priced at $9.60 and that makes this author's books about 47% less than the average price.

Audible, Inc. prices their narrated books at a premium. Their books are priced 15% higher than the average price.