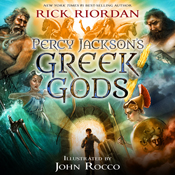 "A publisher in New York asked me to write down what I know about the Greek gods, and I was like, 'Can we do this anonymously?' Because I don't need the Olympians mad at me again. But if it helps you to know your Greek gods, and survive an encounter with them if they ever show up in your face, then I guess writing all this down will be my good deed for the week." So begins Percy Jackson's Greek Gods , in which the son of Poseidon adds his own magic - and sarcastic asides - to the classics. He explains how the world was created, then gives listeners his personal take on a who's who of ancients, from Apollo to Zeus. Percy does not hold back: "If you like horror shows, blood baths, lying, stealing, backstabbing, and cannibalism, then read on, because it definitely was a Golden Age for all that."

Percy Jackson's Greek Gods is available in a downloadable version that can be played on iPods, iPhones, iPads, Droid phones, Blackberry's and numerous other types of devices.

This performance of Percy Jackson's Greek Gods is longer than average at 746 minutes long.

Percy Jackson's Greek Gods costs more than the average. This version costs $35.00 and that is 94% more than average.

Rick Riordan's audiobooks are rated by listeners at 68 out of a possible 100 points and that about 8% worse than the average rating.

The average audio book written by Rick Riordan is 601 minutes long. That makes this author's books about 69% longer than the average length.

Rick Riordan's audio books are priced at an average of $25.17. That makes them about 40% more expensive than the average price.

The Candlestone: Dragons in Our Midst #2

Tears of a Dragon: Dragons in Our Midst

Raising Dragons: Dragons in Our Midst #1