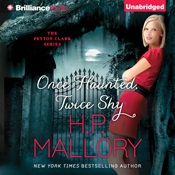 Sassy, spirited Peyton Clark is back - and she¿s not alone! After agreeing to let the spirit of Drake Montague inhabit her body, Peyton soon discovers that the twentieth-century French policeman may be dead but his lothario longings sure aren¿t. Now she has to find a way to explain to her sweet, sexy boyfriend, Ryan Kelly, that a spirit has taken up residence in her head, whispering French words of affection day and night. While Peyton is torn between her love for a living man and her growing affection for one deceased, supernatural activity in New Orleans spikes - and something wicked this way comes. With the help of her friends (and a little voodoo), Peyton learns that the demonic spirit of the Axeman may still dwell in her home. To stop bloody history from repeating itself, Peyton will have to travel back a century to confront the Axeman at his roots, with the help of a certain handsome - and suddenly flesh and blood - police officer in the Big Easy.

Once Haunted, Twice Shy is available in a downloadable version that can be played on iPods, iPhones, iPads, Droid phones, Blackberry's and numerous other types of devices.

This performance of Once Haunted, Twice Shy is longer than average at 514 minutes long.

This version of Once Haunted, Twice Shy: Peyton Clark, Book 2 costs less than average. The price is $10.49 and that is 42% less than the average.

H. P. Mallory's audiobooks are rated by listeners at 25 out of a possible 100 points and that about 67% worse than the average rating.

The average audio book written by H. P. Mallory is 528 minutes long. That makes this author's books about 49% longer than the average length.

H. P. Mallory's audio books are priced at an average of $20.57. That makes them about 14% more expensive than the average price.