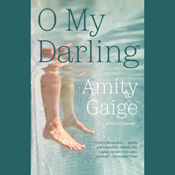 O My Darling: A Novel

The external lives of Clark, a high school guidance counselor, and Charlotte, a bookkeeper, are utterly ordinary, but their interior lives are as bold and complex as abstract paintings colored by imagined possibilities, childhood joys and, more darkly, by deeply buried fears. When Clark rescues a young boy from drowning, a chain of events - some comic, some harrowing - is set in motion, revealing the fault lines of the couple's marriage and individual psyches. Amity Gaige is a consummate stylist. Her every sentence contains a tiny world - marrying striking images to deep, soulful ideas in perfectly concise fashion.

O My Darling is available in a downloadable version that can be played on iPods, iPhones, iPads, Droid phones, Blackberry's and numerous other types of devices.

This performance of O My Darling is longer than average at 420 minutes long.

O My Darling: A Novel costs more than the average. This version costs $23.60 and that is 31% more than average.

Amity Gaige's audiobooks are rated by listeners at 0 out of a possible 100 points and that about 100% worse than the average rating.

The average audio book written by Amity Gaige is 425 minutes long. That makes this author's books about 20% longer than the average length.

Amity Gaige's audio books are priced at an average of $23.60. That makes them about 31% more expensive than the average price.