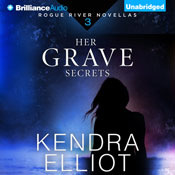 There are no secrets in a small town - until someone has one worth dying for. Local cop Stevie Taylor and police chief Zane Duncan have startling new proof that a deadly street drug is expanding its poisonous grip on their small town: A skull found on the banks of the Rogue River has two bullet holes in the back. Still caught up in the excitement of their new relationship, Stevie and Zane are determined to track down the drug¿s source before more lives in Solitude, Oregon, are lost. Then one death strikes especially close to home, leading to heartache and confusion for Stevie. As the drug distributers strike hard and the body count in Solitude grows higher, she and Zane must hunt down the deadly killer - but are they the predators, or the prey? Filled with unexpected twists, Her Grave Secrets is the third exciting Rogue River novella in the romantic suspense series from Kendra Elliot and Melinda Leigh.

Her Grave Secrets is available in a downloadable version that can be played on iPods, iPhones, iPads, Droid phones, Blackberry's and numerous other types of devices.

This reading of Her Grave Secrets is shorter than average. It is 159 minutes long. This makes the listening experience about 100% shorter than normal.

This version of Her Grave Secrets: Rogue River Novella, Book 3 costs less than average. The price is $10.49 and that is 42% less than the average.

Kendra Elliot's audiobooks are rated by listeners at 21 out of a possible 100 points and that about 71% worse than the average rating.

The average audio book written by Kendra Elliot is 479 minutes long. That makes this author's books about 35% longer than the average length.

Kendra Elliot's average audiobook is priced at $11.99 and that makes this author's books about 33% less than the average price.