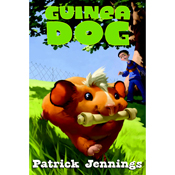 Rufus has been dreaming of getting a dog. His best friend has one. His worst friend has one. But his dad has a few objections: They whine. They gnaw. They bark. They scratch. They beg. They drool. Rufus pays no attention when his mom offers her think-outside-the-box suggestion, because she can't be serious. She can't be. She can be. And she actually comes home with a guinea pig. And if Rufus's dad thinks dogs are a problem, he won't know what hit him when he meets the Guinea Pig that thinks she's a dog. She barks. She bites. She'll eat your homework.

Guinea Dog is available in a downloadable version that can be played on iPods, iPhones, iPads, Droid phones, Blackberry's and numerous other types of devices.

This reading of Guinea Dog is shorter than average. It is 194 minutes long. This makes the listening experience about 100% shorter than normal.

Guinea Dog costs more than the average. This version costs $19.60 and that is 9% more than average.

Circles of Seven: Dragons in Our Midst #3