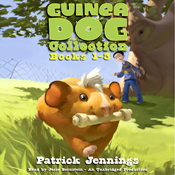 Guinea Dog : Rufus has been dreaming of getting a dog. His best friend has one. His worst friend has one. But his dad has a few objections: They whine. They gnaw. They bark. They scratch. They beg. They drool. Rufus pays no attention when his mom offers her think-outside-the-box suggestion, because she can't be serious. She can't be. She can be. And she actually comes home with a guinea pig. And if Rufus's dad thinks dogs are a problem, he won't know what hit him when he meets the Guinea Pig that thinks she's a dog. She barks. She bites. She'll eat your homework. Guinea Dog 2 : When his classmates learn about Fido, the guinea pig that acts like a dog, they all want a piece of Rufus, her owner. But Rufus hates the attention, the demands, the "celebrity." So he decides to make Fido learn how to be an actual guinea pig. But when she goes missing, he feels terrible. Was she lost, "dognapped," or did she run away, because he no longer liked her just the way she was? Offering the same offbeat humor and pacing of the first Guinea Dog , this novel will prove to be a listener's best friend. Guinea Dog 3 : When Rufus, Murphy, Lurena, and their pets go camping, they meet Pedro, a shy boy who seems afraid of just about everything - especially the water. One thing leads to another and the kids go into a nearby town to buy him a pet to cheer him up - a guinea pig, naturally. Yet what they bring home may look like a guinea pig, but it can swim - like an otter! Guinea Dog has appeared not only on many state lists, but on county and school district lists as well. Here are just some of its appearances: Hawaii NeNe Award Nominee, Washington State Sasquatch Award Nominee, Massachusetts Children's Book Award Honor, Florida Sunshine State Master List, Kansas Winner of the William Allen White Award and Colorado Children's Book Award Nominee.

Guinea Dog Collection is available in a downloadable version that can be played on iPods, iPhones, iPads, Droid phones, Blackberry's and numerous other types of devices.

This performance of Guinea Dog Collection is longer than average at 546 minutes long.

Guinea Dog Collection: Books 1-3 costs more than the average. This version costs $35.00 and that is 94% more than average.