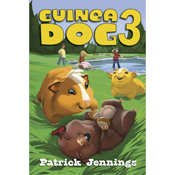 An award-winning, hilariously funny middle-grade series about guinea pigs who act like other pets will move its author, Patrick Jennings, into the ranks of much-loved writers, such as Louis Sachar and Andrew Clements. When Rufus, Murphy, Lurena, and their pets go camping, they meet Pedro, a shy boy who seems afraid of just about everything - especially the water. One thing leads to another and the kids go into a nearby town to buy him a pet to cheer him up - a guinea pig, naturally. Yet what they bring home may look like a guinea pig, but it can swim - like an otter. Guinea Dog has appeared not only on many state lists, but on county and school district lists as well. Here are just some of its appearances: Hawaii NeNe Award Nominee, Washington State Sasquatch Award Nominee, Massachusetts Children's Book Award Honor, Florida Sunshine State Master List, Kansas Winner of the William Allen White Award, Colorado Children's Book Award Nominee, New Hampshire Great Stone Face Award Master List, and Texas's Cy-Fair Horned Toad Tales List.

Guinea Dog 3 is available in a downloadable version that can be played on iPods, iPhones, iPads, Droid phones, Blackberry's and numerous other types of devices.

This reading of Guinea Dog 3 is shorter than average. It is 180 minutes long. This makes the listening experience about 100% shorter than normal.

Guinea Dog 3 costs more than the average. This version costs $19.60 and that is 9% more than average.

The Candlestone: Dragons in Our Midst #2