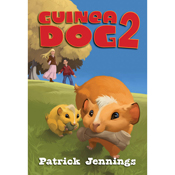 Listeners who loved Guinea Dog have been sitting, begging, and rolling over for a sequel. The beloved Patrick Jennings returns with the follow up to his award-winning and state list hogging title! When his classmates learn about Fido, the guinea pig that acts like a dog, they all want a piece of Rufus, her owner. But Rufus hates the attention, the demands, the "celebrity." So he decides to make Fido learn how to be an actual guinea pig. But when she goes missing, he feels terrible. Was she lost, "dognapped," or did she run away, because he no longer liked her just the way she was? Offering the same offbeat humor and pacing of the first Guinea Dog , this novel will prove to be a listener's best friend.

Guinea Dog 2 is available in a downloadable version that can be played on iPods, iPhones, iPads, Droid phones, Blackberry's and numerous other types of devices.

This reading of Guinea Dog 2 is shorter than average. It is 172 minutes long. This makes the listening experience about 100% shorter than normal.

Guinea Dog 2 costs more than the average. This version costs $19.60 and that is 9% more than average.

Tears of a Dragon: Dragons in Our Midst

The Bones of Makaidos: Oracles of Fire, Bo...