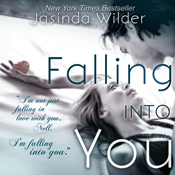 I wasn't always in love with Colton Calloway; I was in love with his younger brother, Kyle, first. Kyle was my first one true love, my first in every way. Then, one stormy August night, he died, and the person I was died with him. Colton didn't teach me how to live. He didn't heal the pain. He didn't make it okay. He taught me how to hurt, how to not be okay, and, eventually, how to let go. Nell Hawthorne is in love with her life-long best friend, Kyle Calloway. Their young love is invincible and life is full of promise; then one night Kyle dies suddenly in a tragic accident and Nell is forever changed. She meets Kyle's older brother, Colton, for the first time at the funeral. They both struggle to move on with life as best they can. Years later, they meet again in New York City, and Colton realizes that Nell has never really gotten over Kyle's death. She seems to be harboring a deeply rooted pain, a heavy weight of guilt, and regret. He knows he shouldn't get involved, but he can't help himself. Trust doesn't come easily for either of them, and they both have demons. Together, they learn the purpose of pain and the meaning of healing, and the importance of forgiveness. Mature Content Warning: 17+ for language, and adult situations

Falling into You is available in a downloadable version that can be played on iPods, iPhones, iPads, Droid phones, Blackberry's and numerous other types of devices.

This performance of Falling into You is longer than average at 557 minutes long.

Falling into You costs more than the average. This version costs $19.95 and that is 11% more than average.

Jasinda Wilder has published 12 audiobooks, including Falling into You (Unabridged).

Jasinda Wilder's audiobooks are rated by listeners at 0 out of a possible 100 points and that about 100% worse than the average rating.

The average audio book written by Jasinda Wilder is 549 minutes long. That makes this author's books about 55% longer than the average length.

Jasinda Wilder's audio books are priced at an average of $21.20. That makes them about 18% more expensive than the average price.

Seth Clarke has published 10 audio CD books, including Falling into You (Unabridged).

Seth Clarke prices their narrated books at a premium. Their books are priced 16% higher than the average price.

Jady says:
TOO ME RIH CAN GET CHRIS BROWN UNDER BETTER CONTROL BECAUSE SHE REAL LOVE HIM . . RHI IS HIS HEART AND WE ALL CAN SEE THAT . RIH LOVE CHRIS BROWN !!! NOT FOR HIS MONEY , LIKE THIS OTHER YOUNG GRIL . LOOK AT THIS TODYIRAH AT AGE 24 WAS VOTED THE 4TH HIGHEST PAID FEMALE IN AMERICA TODAY ON CNN .SHES VERY PRETTY AND , SEXY AND CAN DO WAY BETTER THEN CHRIS BROWN IF SHE WANTED .

Secrets of a Proper Lady

The Truth about Lord Stoneville