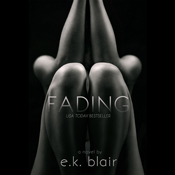 Can a guilty conscience keep wounds from healing? Fine arts major, Candace Parker, grew up with a mother who thinks image is everything, and her daughter¿s perfection will never be good enough. About to graduate college and pursue her dreams of becoming a professional ballerina, Candace decides it¿s time to let go and have a little fun. But fun is short-lived when a brutal attack leaves her completely shattered. The memories that consume and torment Candace are starting to destroy her when she meets Ryan Campbell, a successful bar owner. He feels instantly connected and tries to show her that hope is worth fighting for. But is Ryan harboring his own demons? As walls slowly begin to chip away, the secrets that are held within start to become painful burdens. At what point do secrets become lies?

Fading is available in a downloadable version that can be played on iPods, iPhones, iPads, Droid phones, Blackberry's and numerous other types of devices.

This performance of Fading is longer than average at 830 minutes long.

Fading costs more than the average. This version costs $24.95 and that is 39% more than average.

E. K. Blair's audiobooks are rated by listeners at 0 out of a possible 100 points and that about 100% worse than the average rating.

The average audio book written by E. K. Blair is 727 minutes long. That makes this author's books about 105% longer than the average length.

E. K. Blair's audio books are priced at an average of $24.95. That makes them about 39% more expensive than the average price.

The Year of Living Scandalously,

Only a Duke Will Do

The Truth about Lord Stoneville