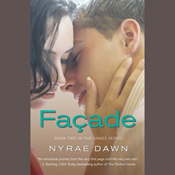 From best-selling author, Nyrae Dawn, comes Book 2 in her new-adult, Games series! "Can love save them?" After her father commits a crime that shatters her family, 18-year-old Delaney Cross is tired of pretending everything is alright. Packing up her car, she sets out to find the people her father hurt. Her search leads her to places she's never been - and into the arms of Adrian Westfall. To the outside world, Adrian is a sexy, charming ladies man. But his playboy persona is just an act. Secretly his soul is tortured by a memory too painful to share. Only Delaney seems to see through his facade to the real man underneath. And for the first time in his life, Adrian feels he can begin to open up about his past. Together, Adrian and Delaney share a passionate, carefree love they never expected to find. Yet both still harbor their own secrets. When the dark truth is finally revealed, will it bring them closer together, or tear them apart forever?

Facade is available in a downloadable version that can be played on iPods, iPhones, iPads, Droid phones, Blackberry's and numerous other types of devices.

This performance of Facade is longer than average at 451 minutes long.

Facade: The Game Series, Book 2 costs more than the average. This version costs $18.88 and that is 5% more than average.

Nyrae Dawn's audiobooks are rated by listeners at 0 out of a possible 100 points and that about 100% worse than the average rating.

The average audio book written by Nyrae Dawn is 427 minutes long. That makes this author's books about 20% longer than the average length.

Nyrae Dawn's audio books are priced at an average of $19.68. That makes them about 9% more expensive than the average price.

Only a Duke Will Do

One Season of Sunshine