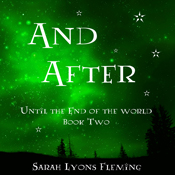 And After: Until the End of the World, Book 2

Cassie Forrest could almost believe life at Kingdom Come Farm is perfect, with Adrian and her friends at her side and spring on the way. The spring thaw also means millions of defrosting zombies, however, and if the past year has taught her anything, it's that life in this new world is highly imperfect. When Safe Zones throughout the country begin to disappear and the zombies at the fences grow in number, Cassie clings to the hope that if she has the people she loves most, it will be all right. But the highly imperfect world makes only one guarantee - zombies never die, never stop, and are never satiated.

Podium Publishing presents And After: Until the End of the World, Book 2 written by Sarah Lyons Fleming and read by Julia Whelan .

And After is available in a downloadable version that can be played on iPods, iPhones, iPads, Droid phones, Blackberry's and numerous other types of devices.

This performance of And After is longer than average at 655 minutes long.

And After: Until the End of the World, Book 2 costs more than the average. This version costs $19.99 and that is 11% more than average.

Sarah Lyons Fleming's audiobooks are rated by listeners at 0 out of a possible 100 points and that about 100% worse than the average rating.

The average audio book written by Sarah Lyons Fleming is 725 minutes long. That makes this author's books about 104% longer than the average length.

Sarah Lyons Fleming's audio books are priced at an average of $22.24. That makes them about 24% more expensive than the average price.

Podium Publishing has published 88 audio CD books, including And After: Until the End of the World, Book 2 (Unabridged).

Podium Publishing prices their narrated books at a premium. Their books are priced 12% higher than the average price.

The Ill-Made Mute: The Bitterbynde, Book 1